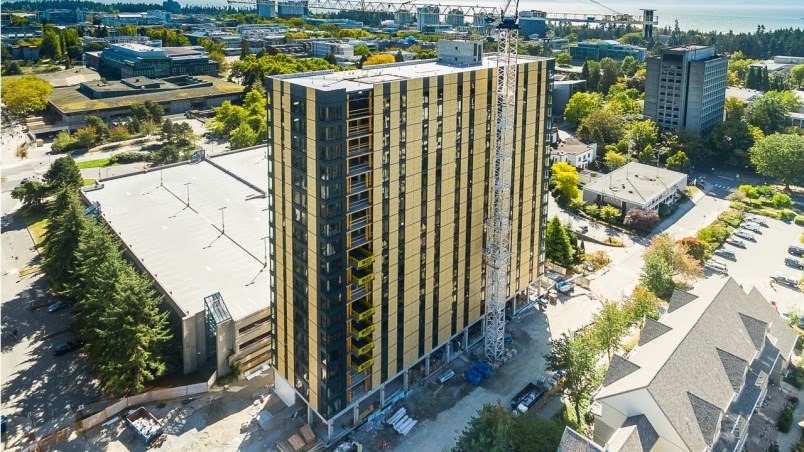 The 18-storey Brock Commons tower at UBC demonstrated the potential of mass-timber construction, but rising costs are making some developers think twice about the environment-friendly building material. / Submitted

Construction using mass timber remains a viable option for addressing the labour and productivity challenges builders face, but unpredictable costs have made it a tough proposition in the current environment.

“The annual growth in productivity for the construction sector post-World War Two is 0.1 per cent per year,” said Peter Moonen, sustainability coordinator with the Canadian Wood Council. “Mass timber will play a role in enabling the construction sector to have industrialized production because of the ability to machine this material to very high tolerances, which makes both assembly and performance improve and it can also address the trade shortages.”

A case in point is the Brock Commons project at UBC, an 18-storey tower that demonstrated the potential of mass timber construction. It completed in 2017, with several prefabricated elements that allowed for faster construction with a minimal workforce.

Moonen pointed out that while a crew of nine people managed the assembly of the top 17 storeys, the concrete podium required a workforce of 54 people.

But the dramatic escalation in the price of wood and other materials over the past year has thrown a wild card into the deck.

“If you look at the last 10-year average for lumber, it hovered around $500-ish per thousand [feet] and the last year you’ve seen price fluctuations of plus or minus $1,000,” said Zack Ross, president of the Cape Group, a developer based in Vancouver. “We’re in conversation with our suppliers, all the way down the supply chain. It’s really important to have some kind of cost certainty.”

It’s not just the cost of the raw materials and finished product that’s a concern. Supply chain issues also play a role, underscoring the need for a guaranteed route to market for mass timber.

While mass timber products can help cut labour costs on site, they needs to reach the site first. All sectors have wrestled with higher shipping costs and longer delivery times, but these need to be addressed for mass timber to be cost-efficient in the current environment.

“One of the biggest challenges when it comes to mass timber construction is logistics,” Ross said. “If you don’t have a logistics network set up to actually get the product from the facility to the actual building site, there’s just no reason to do it. It doesn’t become economic, it doesn’t become feasible or practical.”

Moonen said the concerns are real, and many manufacturers are working to address the cost issues.

“The fluctuation in wood has been bigger than anything I’ve ever seen in the last 30 years,” he said. “It poses a real challenge for anybody who’s planning a project two, three years down the road.”

To address cost uncertainties, manufacturers are working with wood suppliers to develop long-term contracts. While mass timber products use raw wood that isn’t suitable for structural uses, growing demand has put a premium even on these supplies.

“Increasingly we are having mass timber producers and glulam producers establish long-term supply agreements with sources of wood, and that’s in the best interests of both,” Moonen said.

The recent approval of encapsulated mass timber construction for 12-storey woodframe towers in the 2020 model national building codes promises to support the demand for mass timber products going forward. B.C. is in a good position to supply the global market, complementing the forest sector as a whole.

Moonen said the global demand for CLT [cross-laminated timber] is anticipated to reach upwards of 3 million cubic metres by 2025.

“If the entire global CLT sector were to get their wood supply only from B.C., it would amount to about 15% of one of B.C.’s annual harvests,” he said.

Retail will top cap rates in 2022, CBRE study says 2022.04.22by Alberta downtowns lead Canada as workers return to offices Next